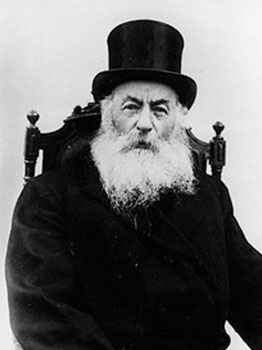 Rav Yitzchak Yaacov Reines (1839-1915) was born in Karolyn, Belarus and studied at the Kollel Prushim and Volozhin Yeshiva. He was the Rav of Saukenai, Lithuania from 1867, and in 1882 he became the Rav of Svencionys, where he founded a yeshiva that taught secular subjects. Later he established the modern Torah Vodaas Yeshiva in Lyda, which attracted Jewish students throughout Russia. Rav Reines’s rational approach to Talmud study was portrayed in his work, Hotem Toknit. His proposal for a ten-year yeshiva program with secular education meeting Russian Government requirements drew fierce opposition from the Jewish community and closed down after four years. Rav Reines was a member of the Hovevei Zion movement, and called for Jewish settlement in Palestine that would combine Torah study with labor. His work Or Hadash al Tzion refuted ultra-Orthodox anti-Zionist arguments and called for a universal form of religious Zionism that would encompass economic productivity and a renewal of Jewish philosophy. Other published work includes Orim Gedolim, a commentary on Halacha, and Orah Vesimcha, which presents Zionism from an Orthodox perspective.