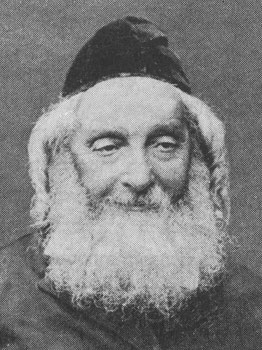 Rav Naftali Zvi Yehuda Berlin (1816-1893), known as the “Netziv.” was the head of the Volozhin Yeshiva from 1854-1892. Under Rav Berlin, enrollment increased steadily and the yeshiva produced prominent rabbinical leaders of East European Jewry, including Rav Shimon Shkop. The Netziv’s leadership of the Volozhin Yeshiva was challenged by Rav J.D. Soloveitchik, who had a different method for studying Torah and went on to found a rabbinical dynasty in Brisk, Belarus. Rav Berlin shut down the Volozhin Yeshiva in 1892 as he wouldn’t comply with restrictions on Judaic studies imposed by the Russian authorities. (The yeshiva reopened on a smaller scale after his death.) Rav Berlin, who had a traditionalist approach to Torah study, authored Ha’amek She’eila, a commentary on the She’iltoth halachic texts by Achai Gaon; Ha’amek Davar , observations on the Torah; Dvar Ha’emek, remarks on Nevi’im and Ketuvim; Meromei Sadeh, an analysis of the Talmud; Imrei Shefer, an interpretation of the Haggadah; and Meishiv Davar , a collection of his responsa.