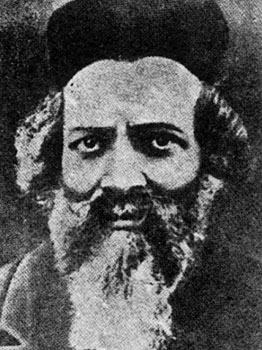 Rav Boruch Ber Leibowitz (1864 –1939) was born in Slutsk, Belarus. A child prodigy, at the age of sixteen he was sent to learn at the Volozhin Yeshiva where he adopted the Talmudic approach of Rav Chaim (Halevi) Soloveitchik, the Brisker Rebbe. This entailed a direct learning methodology that weighed and measured every sentence and every word of the Rishonim (the sages of Medieval times). As a disciple of the Brisker Rebbe, Rav Boruch Ber often said “One must strive for the the amitah shel Torah – the innermost truth of the Torah’s teachings.” Rav Boruch married the daughter of Rav Abraham Zimmerman, whom he succeeded as Rav of Halusk. In 1904 he was appointed Rosh Yeshiva of the Kneseth Beis Yitzchak Yeshiva in Slobodka. In World War I he left Slabodka and relocated the yeshiva to Minsk, then to Kremenchug and Vilna. In 1926 he re-established the yeshiva in Kaminetz, where it continued to flourish, attracting hundreds of students. Famed for his precise Talmudic lectures, Rav Boruch Ber Leibowitz authored Birkas Shmuel, named in memory of his father, Shmuel Lebowitz. This work includes novel insights on Torah and Talmud topics as well as many unwritten teachings of the Brisker Rebbe. Shortly before his death in 1939, Rav Boruch Ber Leibowitz moved his yeshiva to a suburb of Vilna in an attempt to flee the Nazis. In 2012, his grave was identified at the Zaretcha Cemetery in Vilna.