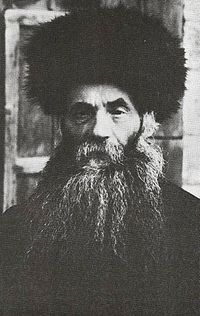 Isser Zalman Meltzer (1870 –1953) was born in the Lithuanian city of Mir (now in Belarus) and studied in the Volozhin Yeshiva under Rav Chaim Soloveichik and the “Netziv,” Rav Naftali Zvi Yehuda Berlin. In later years he became a disciple of the Chofetz Chaim and Rav Nosson Tzvi Finkel. Together with his brother-in-law, Rav Moshe Mordechai Epstein, the head of the Slabodka Yeshiva, he contributed to the founding of the city of Hadera by purchasing land for an etrog orchard. In 1897, Rav Meltzer was appointed the head of the Ridvaz Yeshiva in Slutsk, and in 1903 he became the Rav of that village. Rav Meltzer was a friend of Rav Avraham Yitzhak Hacohen Kook, the Chief Rabbi of Palestine, and an ardent supporter of Zionism. Before his death, Rav Meltzer served as the Rosh Yeshiva of the Etz Chaim Yeshiva in Jerusalem. Rav Meltzer is known as the “Even HaEzel,” the name of the scholarly commentary he penned on the Rambam’s Mishne Torah.