Where It All Began

Rav Chaim Rabinovitch, known as Rav Chaim of Volozhin, had a vision to establish a yeshiva that would produce great Jewish scholars and leaders. In 1803, the Yeshiva Eitz Chaim Volozhin opened its doors and became the mother yeshiva of Lithuanian Jewry.

As the prime talmid of the Vilna Gaon, Rav Chaim implemented the Gra’s new methodology of teaching that became the pattern and prototype of Yeshivos throughout the future centuries.

Yeshiva Eitz Chaim Volozhin became one of the main Jewish sources of learning whose influence reached all four corners of the earth.

The Gedolei Hador who studied in Yeshiva Eitz Chaim Volozhin spread its spirit and legacy leaving a timeless impact on the Jewish world in general and the Torah world in particular.

Rav Chaim did not want his students to feel like charity cases and to receive bed and board by the local population so he personally initiated paying for the students so they would not feel uncomfortable. He owned a textile factory, which his wife operated and used the profits to fund his students.

Study in the Yeshiva Eitz Chaim Volozhin took place 24 hours a day without vacations — a reflection of the view that the existence of the world depended on the study of Torah.

Students came from all over the world to learn at Yeshiva Eitz Chaim Volozhin.

Yad Yisroel, who does Kiruv in Belarus, together with the Union of Religious Congregations of the Republic of Belarus, aspire to give Jews a place they can go to in order to feel their Yiddishkeit, where they will experience the ambience of being a Jew, learn more about their Jewish heritage and stand in a building where such Gedolim once stood.

Yeshiva Eitz Chaim Volozhin is being renovated so the torch of Yiddishkeit will once again shine from within these four walls.

After the death of Rav Chaim of Volozhin in 1821, his son Isaac became head of the Yeshiva. When Isaac died in 1849, Rabbi Eliezer Fried was appointed head of the Yeshiva, with Rabbi Naftali Zvi Yehuda Berlin, known as the Natziv, as his assistant.

Unfortunately, Rabbi Fried died soon after, in 1854, whereupon Rabbi Berlin became the new head along with Rabbi Joseph Ber Soloveichik, who was the assistant Rosh Yeshiva. Rabbi Soloveichik left in 1865 to become a rabbi in Slutsk.

Yeshiva Eitz Chaim Volozhin closed in 1892 due to the Russian government’s demand for the introduction of certain secular studies. Rabbi Berlin refused to comply and was forced to close the yeshiva.

Rabbi Refael Shapiro, the son-in-law of Rabbi Naftali Zvi Yehuda Berlin, reopened the yeshiva in 1899, albeit on a smaller scale. It remained open until World War II, and was reestablished on a small scale, in Israel after the Second World War.

During the war German soldiers used the building as a stable and it was subsequently converted into a canteen and deli.

Yeshiva Eitz Chaim Volozhin was returned to the Jewish community of Belarus in 1989.

The building is considered a cultural and architectural landmarkand in 1998, the Yeshiva Eitz Chaim Volozhin was registered on the State List of Historical and Cultural Monuments of the Republic of Belarus.

In 2000, the Valozhyn authorities returned the building to the Jewish Religious Union of Belarus, an Orthodox Jewish umbrella organization.

In 2007, the government of Belarus threatened to repossess the building unless the community raised $20,000 in order to renovate it. The Jewish community in America took action and Agudath Israel raised money to restore the site.

In 2010 the Republic of Belarus issued a silver coin: “Volozhin Yeshiva”. 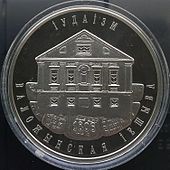