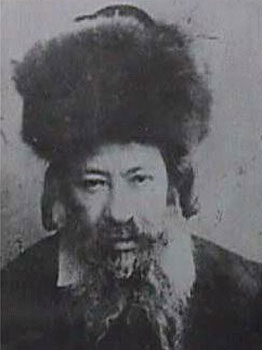 Rav Refael Shapiro (1837–1921) was Rosh Yeshiva of the Volozhin yeshiva and a son-in-law of the “Netziv,” Rav Naftali Zvi Yehuda Berlin. After the Volozhin yeshiva was closed down in 1892 by order of the Russian government (the Netziv had refused to comply with the authorities’ restrictions on Judaic studies), he reopened it in 1899, however on a smaller scale. Rav Shapiro is known as the Toras Refael after his primary work. He ordained Rav Isser Yehuda Unterman, who who had studied in the Kollel of the Volozhin Yeshiva before opening his own yeshiva in the neighboring Belarusian town of Vishnevo, and who would later become one of Israel’s chief rabbis. In addition, Rav Shapiro gave semicha to Rav Moshe Satzkes, who was known as the Łomża Rov, and Rav Meir Joshua Rosenberg. Rav Shapiro was the father-in-law of Rav Chaim Soloveitchik of Brisk and grandfather of Rav Moshe Shmuel Shapira, who settled in Eretz Yisroel in 1938 and years later joined the Moetzes Gedolei HaTorah of Agudas Yisrael.