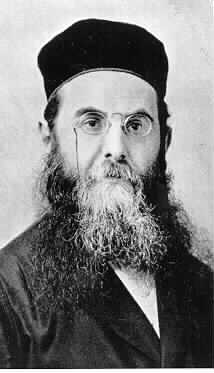 Rav Menachem Rissikoff (1866–1960) the son of the prominent Rosh Yeshiva Rav Zvi Yosef Resnick, was born in Zhetel,[2] Belarus, and studied in yeshivot in Volozhin and Vilna, where he received his Smicha at the age of seventeen. Rav Rissikoff immigrated to the United States in 1906 and served as Rav in a number of synagogues in Brooklyn, New York, including the Moore Street Congregation in Williamsburg and Divre Menachem in the Bedford-Stuyvesant section. He also served as Recording Secretary of the Assembly of Orthodox Rabbis of America and Canada. Rav Rissikoff was a regular contributor to the Degel Israel Torah Journal and authored numerous articles on Halacha. His published works include: Shaarei Shamayim, a commentary on the Shulchan Aruch, Shaarei Zeva, on klashrut laws, and Torat Hakohanim, on laws pertaining to kohanim. On the subject of agunot, a woman whose husband has left her without granting a divorce, Rav Rissikoff called for enhanced authority of the Bet Din to enable women to remarry by religious decree. His writing and views were endorsed by rabbinical authorities in the US and Israel, including Rav Tzvi Pesach Frank and Rav Abraham Yitzchak HaKohen Kook, the Ashkenazi Chief Rabbi of Palestine.