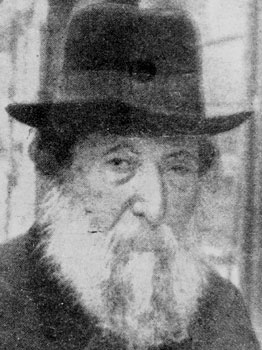 Rav Chaim Ozer Grodzinski (1863-1940) was born in Ilwye, Belarus, where his father, Rav David Shlomo Grodzinski, served as Rav for over 40 years. As a student at the Volozhin Yeshiva, he was a close disciple of Rav Chaim Soloveichik. In the late Nineteenth and early Twentieth Centuries, Rav Chaim Ozer Grodzinski was recognized as a leading Talmud scholar, rabbinical judge and halachic authority in Vilnius, Lithuania. He was one of the administrators of the Rameilles Yeshiva of Vilnius, and also established a group of elite young scholars who became future Torah leaders: Rav Yehezkel Abramsky, Rav Eliezer Silver, Rav Moshe Shatzkes, and Rav Reuven Katz. Rav Chaim turned down offers for Chief Rabbi positions in Jerusalem and St. Petersberg, preferring to remain where he was most needed in Vilnius, which did not have a main Rav. As a dedicated community leader, he played a role in preserving Lithuanian yeshivas during the Communist era. During the Nazi invasion of Poland in 1939, he helped save Polish yeshivas by arranging their relocation to Lithuanian cities.