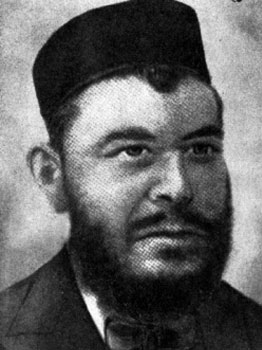 Rav Baruch Halevi Epstein (1860-1941) was the son of Rav Yechiel Michel Epstein, the Rav of Novorodok and author of Aruch HaShulchan. Rav Epstein grew up in Novarodok, moved to Pinsk and was a student at the Volozhin Yeshiva under his uncle the “Netziv,” Rav Naftali Zvi Yehuda Berlin. During a brief stint in the United States (1923-26), he served as Director of the Ezras Torah Fund, which assisted roshei yeshivot and yeshivot worldwide. Rav Epstein was best known as the author of Torah Temimah, a commentary on the Torah. His other published works included: Baruch she-Amar, a commentary on the siddur, and Mekor Baruch, an autobiographical work with notes on the Volozhin Yeshiva.