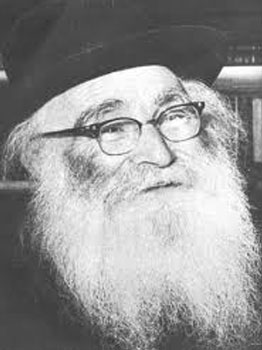 Rav Aryeh Levin (1885-1969), was born near the village of Orla, near Białystok, Russia and attended the great yeshivas of Slonim, Slutsk, Volozhin and Brisk. In later years he moved to British Mandate Palestine. As the spiritual mentor of the Etz Chaim Yeshiva, Rav Aryeh was known as a model educator who practiced humility, kindness and respect for all his students. In 1931, he was appointed by Chief Rabbi Avraham Isaac Kook as the official Jewish prison chaplain, which entailed visits to members of the Jewish underground groups, the Hagana, Palmach, Irgun and Lehi, in Jerusalem’s Central Prison, the Russian Compound. Rav Aryeh was also known as the “Tzadik of Jerusalem” who would spend hours at the Bikur Holim Hospital visiting the sick and elderly who had no living relatives. He was a frequent visitor at hospitals for lepers, including a clinic in Bethlehem where most of the patients were Arabs. After the Israeli War of Independence, Rav Aryeh Levin conducted the little used Goral Hagra ritual in order to identify the mutilated remains of 12 fighters of the Haganna’s ill-fated Convoy of 35, for which Kibbutz Netiv HaLamed Hei is named.