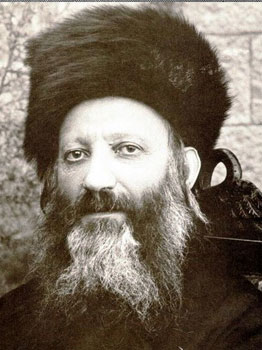 Rav Abraham Isaac Kook (1865–1935) was the son of Rav Shlomo Zalman Ha-Cohen Kook. A child prodigy, he studied in the Volozhin Yeshiva under the “Netziv,” Rav Naftali Zvi Yehuda Berlin, who once said that if the Volozhin Yeshiva had been founded just to educate Rav Kook, it would have been worthwhile. His first rabbinical posts were in Zaumel, Lithuania and Bausk, Latvia. In 1904, Rav Kook moved to Ottoman Palestine to take over the rabbinical post in Jaffa, which included responsibility for the mostly secular Zionist agricultural settlements nearby. Rav Kook also maintained a correspondence with the Jews of Yemen. His influence on Jews of diverse backgrounds and levels of religious belief was made manifest as he engaged in kiruv, Jewish outreach, to spread the word of Torah and Halakha. Rav Kook tried to build channels of communication between the secular Zionist leadership, religious Zionists and non-Zionist Orthodox Jews. He maintained that the Zionists were representatives of a heavenly plan to bring about the Messianic era. After World War One he was appointed the first Ashkenazi Chief Rabbi of British Mandatory Palestine, and soon after established in Jerusalem Yeshivat Mercaz HaRav Kook, which became known as Mercaz HaRav. His renowned books include Orot HaTeshuva, Orot HaEmunah, Orot Hakodesh and Orot HaTorah. Rav Kook is regarded as one of the most influential rabbinical figures of the Twentieth Century.